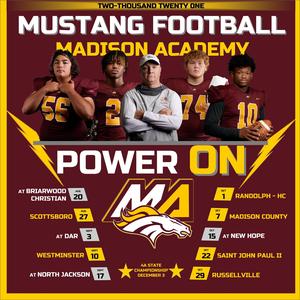 16th Region Championship and State Semi-final finish
Posting a 12-2 record, Madison Academy Football wrapped up a successful 2021 campaign, with a final regular season ASWA ranking of #1 in 4A, and a spot in the final edition of the State Power 25 ranking.
The Mustangs started 2021 with a loss on the road to 6A Briarwood, then reeled off 12 straight wins before a heartbreaking 4 point loss in the State Semifinal game.  Along the way, MA earned dominating wins over local region rivals - 52-14 over Westminster, 33-0 over North Jackson, 42-16 over Randolph, 42-7 over Madison County - and finished the regular season with a 34-20 win over 5A #6 Russellville.
Several players garnered post-season honors - Tim Spurlock, Kaden Young, and Will Stokes all were first-team All State selections, as well as All-Region.  The All-Huntsville Region Football Team, including players from all classifications throughout Jackson, Limestone, Madison, Marshall and Morgan counties, was dominated by Mustangs: Ian Vachon and Kaden Young were first team selections, Will Stokes was Offensive MVP, and Tim Spurlock was Defensive MVP.  Daniel Scott and Kanen Hamlett were also honored.  Stokes, Spurlock and Young were also selected to play in the North-South All-Star game.  Stokes was also chosen by the ASWA as one of Alabama's Top 12 Football players for 2021:  Link to story