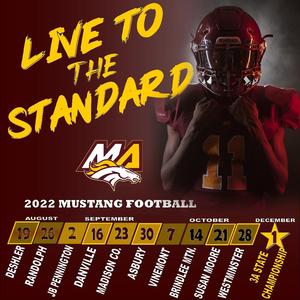 The Mustangs traveled to Blountsville to open Region 7 play, and handed previously undefeated J. B. Pennington a convincing 49 - 7 defeat.  Ken Cherry's first rushing TD opened the scoring, capping a 75 yard opening drive, and an AJ Rice interception on the Tigers' first offensive possession started the ball rolling toward a 42 - 0 halftime lead.  Cherry had two other rushing TD's, Josh Williams added one on the ground, and Carson Creehan found Mario Brewer for one through the air.
The Mustangs have a week off before Danville, another Region 7 opponent, comes to MA on September 16.  J. B. Pennington will play Danville next Friday.
GO MUSTANGS!